A “Call Attempt” occurs when turboDial begins ringing a number that is being called from turboDial (outbound call). With all call attempts except “Intercom Calls” turboDial will trigger an API Goal for the contact being called. This Call Attempt API Goal is triggered regardless what happens with the call after it is initiated, that is, it is triggered for both calls that are answered and calls that are not answered.

Please Read: After you add or change an API Goal in your Infusionsoft Campaign Builder you must inform turboDial to look for it by clicking the Reset Disabled Goals button in your turboDial Management Account.

See the “Call Attempt Reporting” section below for information on how to use these tools to create reports to track Call Attempts.

To have a goal triggered for the case when a normal outbound Call Attempt occurs you can create an API Goal in a Campaign Builder sequence and set these values in it:

*Note: In rare cases one Contact in a group being called with Power Dial can answer before calls have started to all of the other Contacts in the group. In that case, the Power Dial Attempt goal will not trigger for a Contact whose call attempt was not started.

To have a goal triggered for the case when a Power Dial Call Attempt occurs you can create an API Goal in a Campaign Builder sequence and set these values in it:

Do you want a tag placed on Contacts who were attempted with Power Dial but were never connected to a phone call?

You can combine use of this automation trigger with use of the Automation Trigger When a Call is Answered to accomplish that. Use the Power Dial attempt trigger to trigger your automation that applies a tag indicating a Power Dial attempt occurred. Then use the Call Answered trigger to remove that tag. When you are finished calling your list only Contact who were attempted but never connected will have that tag.

A Dynamic Dial “Call Attempt” occurs when turboDial begins ringing a number as in an attempt to achieve a connected call using Dynamic Dial feature.

To have a goal triggered for the case when a Dynamic Dial Call Attempt occurs you can create an API Goal in a Campaign Builder sequence and set these values in it:

The standard reporting systems in turboDial are designed to report on calls that are completed, that is, calls that are answered by a human or by a machine.  Reports that focus on completed calls are less prone to “gaming” where a calling agent initiates many calls for the sole purpose of making their work effort look greater than it really is.

However, if you also want a report based on calls that are attempted, that is, calls that are dialed without regard to whether they are answered, then that can be accomplished using the automation triggers described above.

A call attempt can be registered as a Note Record on a Contact Record by building automation in Infusionsoft Campaign Builder that is triggered by the Dial Attempt API Goal triggers described above.

Your Campaign would consist of these elements:

Here’s the internals of the campaign sequence:

Here’s the Note to be applied: 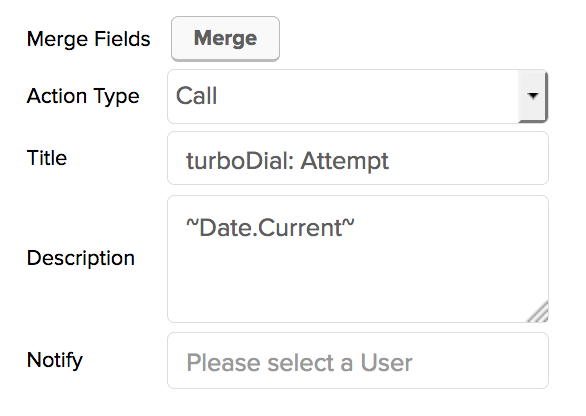 This method will not assign ownership of the Note Record to the turboDial user who made the call. So unless another method to associate ownership exists the reports you create based on these Note records cannot be used to associate call attempts to specific users in your team.

Was this article helpful to you? Yes 2 No